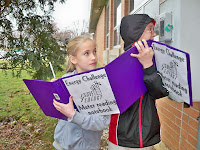 We thought you'd enjoy this story from the Herald-Times in Bloomington. It's a great article about Putnam RISE, a broad partnership that's bringing energy savings and investments to schools, homes and businesses across the county.

An initiative is under way in Putnam County that encourages residents, civic organizations and governmental units to cut energy use and support the local economy. Energy challenges are heating up homes and schools, with cash and prizes valued at more than $40,000 at stake.

Some lucky resident of Putnam County — Greencastle is the county seat — will win a “Green Home Makeover” that includes four new energy-efficient home appliances; 100 homes will receive free energy audits; and 21 homes will get weatherized — for free.

Schools are competing, not only to cut their March and April electric and natural gas bills relative to the same months in 2010, but also to get households to sign on to an Energy Saving Pledge, in which residents promise to take any or all of dozens of actions to cut energy consumption and to save money on utility bills.

The project is called Putnam RISE — Renewal, Investment, Savings and Efficiency — and is funded by the Putnam County Community Foundation and the Vectren Foundation. Partners are numerous, including all 16 schools in the county’s four public school corporations; the Greencastle Chamber of Commerce; Greencastle Presbyterian Church; and Shuee & Sons Great Buys Plus, the local store that will donate the four appliances.

Similar initiatives have been undertaken or are under way in Monroe County — examples include free home energy audits from the city of Bloomington , the Earth Care interfaith coalitions’s energy conservation program and Indiana University ’s own campuswide energy challenge competition. However, Putnam County ’s approach is to reach multiple constituencies with a single, comprehensive program.

As of Tuesday, 1,005 homes have taken the Energy Saving Pledge in Putnam County , which counted only 12,374 households in the 2000 Census. That means 8 percent of the county’s households are participating.

“Our interest is, on the most broad level, to help households across county to secure energy savings from efficiency and conservation efforts represented in the pledge,” Setchell said. “Greencastle schools, for example, have been working on this since 2006, and have secured well over a half-million dollars in savings at a time when budgets are streamlined. That’s money we can reinvest in teachers, students and instruction.”

The Greencastle Chamber of Commerce is on board, too, organizing a buy-local campaign that will offer “Buy Local Bucks” — coupons given with certain purchases at local retailers that are good for discounts at other local stores. That component of Putnam RISE is expected to kick off May 1.

“We realized we wanted to strengthen the value of local consumption, realizing that local business are the red, beating heart of the community,” Setchell said.

“Efforts to make our greater community more energy efficient are a benefit to all. Not only can it help individuals, households, schools, and municipalities save money, the benefits of learning more sustainable practices are good for the planet and last a lifetime,” Murray said in an email. “Sustainability is something I have been interested in before taking office, and as a city, we have worked hard to improve our practices, and are very proud to be the only city in Indiana to receive Indiana Association of Cities and Towns’ Green Community of the Year award each of the three years that the state evaluation competition has been offered.”

The Greencastle Sustainability Commission says in its mission statement that “it will take a village to achieve environmental solutions to strengthen our community, economy, culture and quality of life.”

Putnam RISE has invited not just the village, but the entire county to reach together for that common goal.
Posted by Community Forward Greencastle at 5:16 PM