We received some outstanding news today! The City of Greencastle was selected as one of the two pilot communities for the state's new multi-year, multi-million-dollar Stellar Communities program!

We are so proud of the hard work that so many people put into our proposal for this program. There's no doubt that our strong partnership with DePauw played a huge role in this positive outcome. THANK YOU to everyone who did their part to ensure that Greencastle came out on top.

We'll share more information soon on what this new state funding will mean to the city's strategic plans for the next few years, but in the meantime, click here to read Lt. Gov. Becky Skillman's news release on the Stellar Communities program, or click here to check out the Banner-Graphic's story.

One last note -- Lt. Gov. Skillman will be here on Thursday herself, to make the news official! It will be a great day!
Posted by Community Forward Greencastle at 11:27 PM No comments: 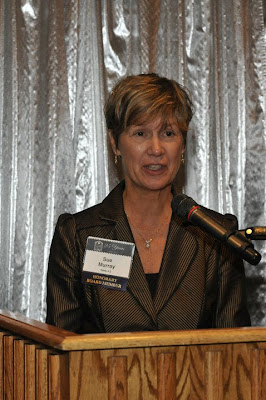 Greencastle Mayor Sue Murray shared her thoughts on the "State of the City" in the Banner-Graphic this week. Below you can read the entirety of her remarks. Please feel free to start your own discussion on Greencastle's successes and challenges in the comments section at the end of this post. Thanks!

When asked, “How are things in Greencastle?” my response is, “We are paying our bills; we finished the year in the black; and we have continued to provide the services our citizens expect.” In these times of economic challenge I am proud and relieved to be able to make that report.

Without a doubt we are in such an enviable position because of the hard work, efficiencies found, and fiscal diligence of our employees and their supervisors. To all of them, I again, say thank you.

2010 was a year of other significant accomplishments also. I would like to share some of those with you.
• We held our first Youth Engagement Summit.
• We received two AARA grants totaling $99,767 that provided for the retrofitting of all remaining traffic lights to LED technology and a new energy efficient lighting system to the Greencastle Fire Department.
• We completed the Albin Pond and Safe Route to School pathway projects.
• We initiated a sidewalk cost-share program for property owners.
• We entered into a “Friendship City” agreement with Qianjiang City, China.
• 9 holes, of a disc golf course, were completed at Big Walnut Sports Park.
• We were named a Tree City for the 11th year and for the first time, received the Growth Award from the Arbor Day Foundation, for our tree planting efforts.
• We completed the North Jackson Lift Station.
• We were able to pave a second parking lot at the Big Walnut Sports Park.
• We extended the curbside trash contract with expanded recycling at no increase in cost.
• We conducted a second series of neighborhood community meetings.
• The city’s Sustainability Commission’s Putnam RISE proposal received the $100,000 Envision ’11 Grant from the Putnam County Community Foundation.
• We received a Disaster Recovery Grant from OCRA (Office of Community and Rural Affairs) of $530,000 for the needed renovations and improvements to the Albin Pond Lake Dam.
• We were named the Green Community of the Year by IACT (Indiana Association of Cities and Towns) for the third time in as many years.
• We were one of two Indiana cities in the final competition for the 2010 Award for Municipal Excellence given by the National League of Cities.
• We are one of twelve finalists for the Indiana Stellar Communities Pilot grant project.
• We are completing the transition to a radio meter reading system in the Water Department.
• We have received a Downtown Façade Planning Grant of $46,620 from OCRA.

Looking to the future and securing our place in it, is a challenging responsibility. There are many influences, opportunities, and coincidences that are outside of municipal control, but have a profound effect on how we plan and how we do our jobs. We will continue to do the daily work of cities: to provide for the public safety, utility services, park and recreational opportunities, planning and building support, a resting place for our departed, and road and sidewalk rehabilitation. We will also continue to look for partnerships and chances for collaboration that will help us grow and enhance our human, social and physical capital. If we do these things, I am confident that we, as a community, will continue to thrive. 2010 was a good year. 2011 has the possibility to be even better.
Posted by Community Forward Greencastle at 2:49 PM No comments: