As we close out May, which is National Historic Preservation Month, here’s another guest blog post submitted by Phil Gick from the Heritage Preservation Society (HPS) of Putnam County.  HPS works to promote and encourage interest in the historic structures, history and heritage of the county, as well as facilitate the identification, preservation and restoration of the area’s structural heritage.

The City of Greencastle’s architecture reflects over 175 years of changing American and Midwestern patterns, with ready evidence of general prosperity, cultural attainment and imaginative design from the early pioneer cabin to the new facilities at DePauw.

Recently, the Heritage Preservation Society completed walking brochures (pictured) that highlight this architecture in three of the city’s Historic Districts that are listed on the National Register of Historic Places.  These districts contain over 400 structures that contribute to their historic beauty, and each of the areas have clear, recognizable themes or “settings” that convey the cultural landscapes of their times.

The Northwood Historic District, with its collection of early to mid-20th century residential resources, and extremely high degree of integrity, provides a window into the period immediately following World War I through the period immediately following World War II.  It beckons you to a time you can only read about in history books now – a time of American innocence.  Driving through the area can be very nostalgic, particularly to those of the “greatest generation” and their children.

The Eastern Enlargement Historic District, with its large stock of late-19th to early 20th century residences, also retains a lot of integrity.  In this district, one can see a wide variety of American architectural styles featured in mansions and small cottages.  This area is still “home” to many of the most prominent residences built in the community during any era.  Beautifully shaded East Washington, Seminary, Anderson and Bloomington streets lead to the homes of the most prosperous Greencastle citizens of the late-19th and early 20th centuries.  The substantial number of “high society” Italianate, Queen Anne, Tudor Gothic Revival and Eastlake structures convey the feel of a quintessential “turn of the century” affluent neighborhood.

As you travel through this district on Seminary Street – the residential “main street” – you will see multiple National Register-listed structures, such as the stately Franklin P. Nelson House and the University President’s official residence, the Elms.  Walk across the district via almost any route and you will fully appreciate the large collection of beautiful turn of the century homes within its footprint.

Of course, as the seat of county government and home to a college, its population soon grew.  From an early time, stores, shops and mills were located around or near the square, and the area to the west was where homes sprung up.   This is what comprises the residential area now known as the Old Greencastle Historic District.  Here, Carpenter-Builder style homes, with a significant complement of Stick and Bungalow structures, dominate.  They speak to the modest means of the city’s early businessmen and workers.

The character and visual elements of these historic residential districts have not changed dramatically from their original settings.  During the summer months, when trees and flowers are in full bloom, and the university is on summer schedule, a walk along many of these districts’ streets quickly returns you to a time when homeowners cut their grass with push lawnmowers…when cars with loud blaring music did not travel the thoroughfares…and when sitting on your front porch, with a radio tuned to a baseball game, was still THE thing to do on a lazy Saturday afternoon.

The Old Greencastle, Eastern Enlargement and Northwood Historic Districts are special – they’re an architectural road map of the community’s existence.  They’re a symbol of the past, but also reflect the pride of the present owners who have taken up the mantle of preserving the physical and visible images of these beautiful places.

What is your favorite historic building or area in Greencastle?  Let us know in the comments below!
Posted by Community Forward Greencastle at 4:32 PM No comments:

Celebrating a Historic Treasure in Greencastle


Below is a guest post written in honor of National Historic Preservation Month by Phil Gick, chair of the Historic Assets Committee of the Heritage Preservation Society of Putnam County.

If you aren’t familiar with the Heritage Preservation Society (HPS) of Putnam County, our purpose is to promote and encourage interest in the historic structures, history and heritage of the county, as well as facilitate the identification, preservation and restoration of our area’s structural heritage. 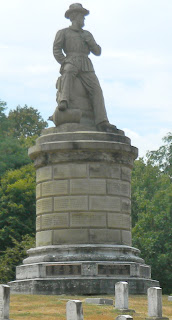 A great example of our recent work is the ongoing effort to restore the Putnam County Civil War Monument (CWM) in Forest Hill Cemetery.  We were first drawn to this beautiful memorial in the fall of 2011, when we noticed its deteriorated state while planning tours of the cemetery.

Over the past year and a half, HPS, in conjunction with others within the county, has taken steps to raise awareness of the history of the monument, along with funds to enable the community to assess, stabilize and restore it.

In celebration of National Historic Preservation Month, I’d like to share a little about the fascinating history of this structure:

In 1865, shortly after the Civil War, the Putnam County Soldiers Monument Association was formed, with the goal of building a monument to honor their local war heroes. By the spring of 1866, $5,000 was raised and a contract with T.D. Jones & Co. of Cincinnati was signed.  The proposed location would be the new Forest Hill Cemetery, and the design would be a statue that featured a figure atop a rather large pedestal.

In 1867, McConnell & O’Hare of Cincinnati erected the shaft.  In 1869, O’Hare & Barry, who cut the soldier figure, saw to its installation atop the pedestal.

On July 2, 1870, a crowd of 8,000 gathered in Peck’s Grove, a large group of trees to the east of the monument near Bloomington St., for the dedication of the nearly 30-foot tall monument.  Special trains, bringing guests from near and far, arrived from Terre Haute and Indianapolis.  Rev. Dr. Thomas Bowman of Indiana AsburyUniversity (now DePauw) offered the opening prayer.  One of the state’s best orators, Col. R. W. Thompson delivered the principal address.  General Lew Wallace of Crawfordsville, author of Ben Hur, spoke.

Following the addresses, the crowd marched to the monument led by Indianapolis and Greencastle brass bands.  In front of the still-veiled statue, the dedication continued.  Veterans of the war, bearing their tattered regimental flags, encircled the platform, while Indiana’s governor and other important “VIPs” and clergy occupied a portion of the platform for the final ceremonial moments prior to the unveiling.

After its dedication, the monument remained a central element of memorial events conducted annually.  But over time, as the generation of those it commemorated passed, such activities tended to gravitate to the Court House Square, where new monuments to those who perished in subsequent conflicts were erected.

Many things make the Putnam County CWM special.  For example, it is only the third such monument of its kind erected in Indiana.  Unlike most, it depicts the “common” soldier; he is seated and looking to the West.  It is larger than most monuments and it was placed in a cemetery, instead of a central site, such as a downtown square.

The CWM still conveys to those who see it the high esteem those within a small Midwestern community held the 321 fellow citizens who made the ultimate sacrifice.  It represents so much about not only the past, but of the spirit and patriotism of today’s citizens.  Hopefully these citizens will ensure the CWM continues to inspire future generations.

To make a donation toward the CWM restoration effort, please contact the Putnam County Community Foundation where HPS has established a Civil War Monument account.
Posted by Community Forward Greencastle at 1:31 PM No comments:

When a Disaster Strikes


Below is a message from Mayor Sue Murray about yesterday's fire in downtown Greencastle:

Early on Friday morning, May 17, a fire broke out on the second floor of one of the buildings in our historic downtown.  The Greencastle Fire Department was on the scene three minutes later, but in less than ten minutes dark billowing smoke could be seen from blocks away.  As I arrived on the site a few minutes later, Chief Newgent already had set up a command post in the area of the Court House and called for assistance. Asst. Chief, Jeff Mace was coordinating the efforts of the department in the back of the first block on E. Washington Street.  (Wilson’s to Starbucks)

As our crews continued to fight, what seemed like an ever-growing threat, mutual aide began arriving from departments throughout the county as well as from Avon, Brazil, Crawfordsville, Danville, and Plainfield.  Even with the addition of reinforcements and equipment this aggressive blaze challenged the units for another two hours.  What was most amazing, and definitely the result of long hours of training and coordination, these departments worked seamlessly to fight back the flames.  It is a direct result of their diligent efforts that there wasn’t significantly more damage to the block.

At the end of the day, we here in Greencastle have much to be thankful for. First, no one was hurt as a result of the fire.  We have an incredibly well trained and dedicated group of firefighters serving our community and we have friends in other communities ready to come to our aide.  Our city’s police force spent the day providing security, traffic control and support. The water department made sure there was a plentiful supply of water available for the fight and our Department of Public Works worked to re-route traffic and came to help with clean-up.  We are grateful to the Mason’s for opening their facility to those in need and for our Red Cross, who set-up their helping headquarters there.  We had many local restaurants and businesses that provided food and beverages for all of the first responders and we had officials from the state that came to offer their support and assistance.

Do I wish May 17 had been different, definitely.  We have much work to do to rebuild and refurbish the buildings affected and their owners and occupants need our continuing help and support, but I am most proud to be the Mayor of this Indiana city where people truly care about those they serve, the jobs they do, and their neighbors.  Today, we are a city of heroes.

The folks at Greencastle City Hall didn't have to look very far last week, to see just what makes this community great.

Right outside their windows, volunteers both young and old were sprucing up the area around the building, laying mulch and planting flowers for springtime.

City Hall employees (not to mention everyone else who works or lives nearby) have DePauw University and the Greencastle Civic League to thank for the lovely landscape improvements. 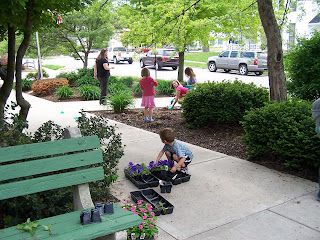 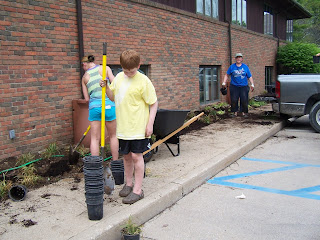 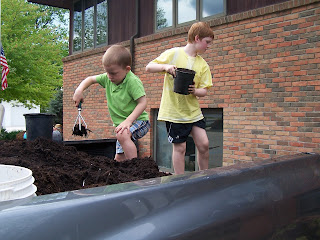 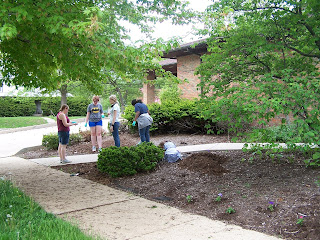 These volunteers are truly helping to move our community forward.  Know anyone else who deserves to be recognized on the city's blog?  Let us know in the comments below!

Posted by Community Forward Greencastle at 10:28 AM No comments: