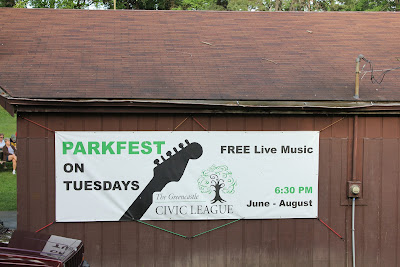 The Greencastle Civic League is proud to present ParkFest 2012!  The free summer concert series kicked off on Tuesday, June 6 with performances by Tim Brickley from Indianapolis and VanTerry from Greencastle/Bloomington.  Circle City Phillies was on hand selling brats, hot dogs, phillies and pulled pork sandwiches.

ParkFest is held on Tuesday nights at 6:30 p.m. from June 5 through August 21 at the band shell in Robe-Ann Park.

The Civic League has been the sole sponsor of ParkFest for the last 18 years.  This year, we are pleased to welcome The Greencastle Friends of the Park Association and DePauwUniversity as new sponsors.  Their support has allowed us to enhance our offerings this summer, which is why we have added a Teen Night and a special welcome to incoming DePauw freshmen.  We are very grateful for and appreciative of our new sponsors for being a part of this community event.

The 19th season also brings big changes to the entertainment line up!   The Civic League issued an open call to musicians and we received 27 submissions from musicians across the Midwest.  From those submissions the ParkFest committee chose 18 acts, many from our local community.   This represents a significant increase from previous years, where we have had eight to nine bands for the entire summer.  Many of these groups are included this year, alongside a diverse slew of new talent.  In selecting musical groups, we paired artists who we felt would appeal to a similar demographic and complement each other, and tried to book the series in a way that offered our entire community – from our seniors to our youth – a unique, enjoyable, and FREE musical experience.

We also are pleased to share that many local restaurants will be involved in this year’s ParkFest.  We hope you take a minute to thank and support the food vendors who will be onsite in the park during the weekly concerts.

The Greencastle Civic League was founded by Katheryn Jones and Barbara Lane in 1984.  It is composed of women who volunteer their time to serving our community through beautification, clean up, cultural development and supporting a wide variety of projects to improve life in Greencastle.  ParkFest is just one of the ways that we show our commitment to the community we are proud to call home.