Guest post by Bobbie Lancaster, one of the local musicians who will be performing December 14 during “Hoosier Holidays,” a blanket drive to help the homeless 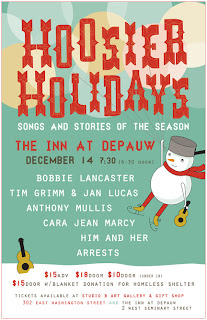 Why do a blanket drive?

Well, he really doesn't want the attention, but the Hoosier Holidays artists were inspired to collect blankets after 8-year-old Jacob Beadles told a Bible study group that he wanted to do something about the heartbreaking reality of homelessness.

Here's how young Jacob sums it up himself:

“During recent trips to Chicago and Indianapolis I saw a lot of homeless people and I've been feeling led to make some blankets for the homeless.  I want to be able to get the material to make blankets to take to some local shelters and possibly hand some out myself.

I told my parents and some friends of theirs at my church about my wish and they are excited to help.  Miss Bobbie told me that she and her friends might be able to help me, too.  This made me feel more confident that we can do this.”

So, of course, all the musicians rallied around this cause.   We want to make a positive impact, and we were also touched by Jacob's loving heart and want to support him in his vision to make a difference!

Bringing a blanket on Friday will allow you to purchase your ticket at the door at a discount.   The Beadles family will be distributing the blankets to area homeless shelters, many of which are taking in Putnam County residents.  If we are flooded with blankets (and we hope we will be), several members of the Greencastle Civic League have volunteered to assist in the distribution effort.

Below is information about some of the artists who will be performing during Hoosier Holidays.  Hope to see you there!

Tim Grimm is an award-winning singer/songwriter who has recorded nine CDs and is at work on a new one to be released during the summer of 2013.  He and his wife Jan Lucas, who accompanies him with vocals and harmonica, recently returned from a five-week tour of the Netherlands, Germany and Italy, playing their brand of Americana-folk music.

Tim’s writing and style have been likened to Bruce Springsteen, Lyle Lovett and Johnny Cash, but his songs of the land and his rural upbringing are uniquely his own.  He also hosts an Americana Series in Columbus, Indiana, and has hosted a number of “Hoosier Music” shows, which includes the Hoosier Holidays shows.  This year marks the fourth annual holiday show that he’s organizing, and he is delighted to bring it to Greencastle for the first time!  Learn more about Tim at www.timgrimm.com.

Bobbie Lancaster, formerly of Bloomington, Indiana, moved here to Greencastle last summer.   She's written and recorded numerous albums and four as a solo artist.   She's had opportunities to perform across the country, with invitations to compete in the New Folk competition at the Kerrville Folk Festival in Texas, and the New Artist showcase at the Falcon Ridge Folk Festival in New York.
Since moving to Greencastle, she's become an active member of the Greencastle Civic League, bringing her professional experiences to the table as the organization revamped ParkFest.  She's really excited to be part of Hoosier Holidays for the 3rd time...especially since the show is going to be here in Greencastle.    Bobbie plans to release a new album, a gospel album, in 2013.  You'll hear a preview at the show on Friday! www.bobbielancaster.com

Him & Her is comprised of husband and wife duo Joel and LaToshia Everson, with friend and fellow War Radio bandmate, Drew Cooper, on percussion.   The couple has made music together for 10 years, including in groups such as The Worship Project and War Radio.  Him & Hers' roots are based in classic folk/rock soul while stretching out into new alt/indie sounds.  www.reverbnation.com/warradio

Anthony Mullis, a.k.a. Gus Moon, grew up in Bainbridge.  He plays in his band Gus Moon and the Tennessee Fire, which just released a CD, "Worn Out Shoes."   He will be recording another disc set for release in early March.  Find Gus’ schedule and info online at www.reverbation.com/gusmoon.

Cara Jean Marcy is a singer/songwriter who lives in Indianapolis.  After years playing bass in bands like 19Clark25, The Warner Gear and the Silver Dollar Family Band, she released her first solo album "Goodnight Charlotte" in 2010 – an album that was named Best Roots Album of the Year by NUVO Newsweekly.   Cara Jean is one of those behind the score for the independent feature film "Paradise Recovered," along with cellist Grover Parido.  She is also founder of the one-off State Fair project, the all-female ensemble Alice Chalmers and the Stick a Cork in Your Jug Band.  Most notably, Cara Jean’s dog thinks she's the best thing since bacon.  www.carajeanwahlers.com

The Banisters  are a high-energy acoustic music band that features expressive three-part harmony singing.  They have played shows all over the Midwest including the Indiana State Fair.  They’ve recorded several CDs – including one with a holiday theme.   http://www.myspace.com/thebannisters#
Posted by Community Forward Greencastle at 8:03 AM No comments:

Hundreds of community members filled the Putnam County Courthouse on December 4 for the 28th Annual Lights of Love ceremony hosted by the Greencastle Civic League. 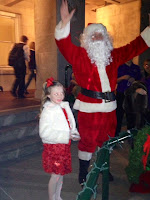 Musical performers included the DePauw University School of Music and Greencastle school choirs, who set the scene for the tree and luminary lightings.

During the event, the Civic League honored Joanne Haymaker and Gwen Morris for their contributions to the Greencastle community.  And the Putnam County Senior Center was recognized with the Spirit of Christmas Award from the Greencastle Chamber of Commerce for their lovely holiday decorations.
New this year was a visit from Santa Claus himself, who lit the holiday light display with Maddie Landry.  Luminaries purchased by community members and businesses represented loved ones, both living and passed.

If you'd like to check it out, the Greencastle Lights of Love plaque will be displayed in the public library. The tree from the ceremony will be added to the Lights of Love Tree Grove at Big Walnut Sports Park.
Posted by Community Forward Greencastle at 10:04 AM No comments: