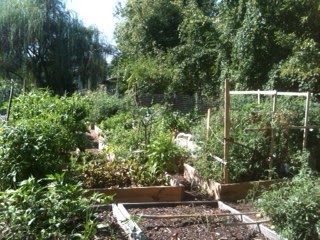 We have a fair number of public plants that are mostly flourishing with little care.  The public plots contain donated peppers, tomatoes, and a watermelon plant.  There was also a squash plant that died, but not before we were able to harvest a couple of squash.   We received a donation of irises which we planted along the western fence.
There are a fair number of tomato and squash plants, and a gourd plant which have come up wild between some of the plots.

Anyone can harvest from the public plants.  The community garden is open every day during the growing season, from dawn until dusk.

Early on, the individual plots included spinach, radishes, lettuce, and dill.  Now they contain tomatoes, peppers, green beans, squash, okra, corn, and herbs among other things.  There are also some ornamental flower plants.  We have two water barrels which the city graciously keeps filled.  In this drought year that has been our main source of water.  Despite the drought, the private plots are absolutely flourishing.  It’s really quite amazing to see.

In the fall, we plan to add a few more raised bed plots.  If you haven’t joined us in previous seasons, we hope you consider becoming a part of our community of gardeners in 2013.